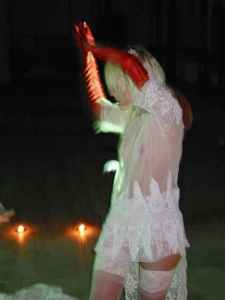 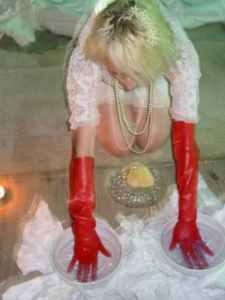 In a white space set in the evocative environments of a church, white garments are scattered casually on the floor, together with other objects, reminders of the past and present, different textures, different cultures: underwear, feathers, lace, flowers, pearls, shredded clothes, posture-correcting straps. A path of candles leads to the space where Emilia Telese engages in casual conversation with the public. Sweet smells envelop the space. She calls for each person, inviting them to the space, then ritually washes their hands and speaks to them about memories, childhood, habitual gestures. She moves with them, following their memories and gestures.

A motion capture device detects the performer and the public’s movements, tracing lines of multicoloured light in real time on the screen behind the performer. The moving beams of coloured light are visible together with the silhouettes of the conversation. The sound that can be heard is the product of a week spent in the same building, recordings of noise, interference, computer fans, lifts, convivial space and time spent in close contact with former strangers, newly acquired friends, together with music generated solely by the computer, forming an image that confounds hardware and software, artificial and human. The performer’s movements influence the sound, which changes according to the position assumed by her gesticulating hands following the conversation with and to the public. Personal memories fuse with those of strangers, recalling the mechanics of relationships.

Gesture maps out environmental and personal space, taking into account the everyday movements that people are engaged into while in conversation. Gesticulating is endemic to all cultures, but it takes place in different degrees and shapes according to different cultural background. Gesture is a study into inter-cultural communication, movement and alternative means of interaction between people.

Gesture is an interactive installation performance exploring non-verbal communication and cultural merges in a visual, sound and evocative environment. Gesture is a space where communication is exchanged, recorded and processed on multiple levels. Gesture questions our cultural habits and animal instincts, enhancing awareness of impulse and involuntary movement. Gesture is a collaborative residency that seeks new paths of interaction between performance work and multimedia.