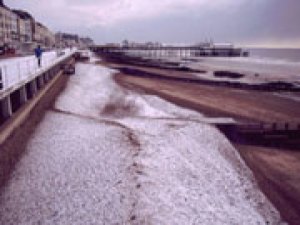 CAR PARK is a composition of parallel images, relics and sound. From the “Concrete King” Sidney Little’s visionary plans in 1934 for ‘Hastings, double decked city of the future’ to a commission for a 1999 performance in the car park he engineered,the first of its kind to be built. From the big flood that hit the town on the programmed date to a homeless costume and dancers searching for a story /CAR PARK traces the reality of the making of a site specific work without the site.Live sound treatments and video mixing, rare archive footage, a visual diary of the creative process with the obstacles involved, and body movement response, are what makes CAR PARK a suggestive and engaging piece. CAR PARK was commissioned to the 10×5 collective in 1999, receiving funds from Hastings Borough Council, Millennium Awards and South East arts Awards for All. It was due to take place in the Carlisle Parade Car Park built by Sydney Little but subsequently hadto be relocated.The Durbar Hall in Hastings Museum was then chosen for the showing of CAR PARK because of its symbolism and history:it too was relocated from a different place into a new context. CAR PARK explores the feats of humankind in pursuit of an utopia, and the dreams that inhabit the act of creation.